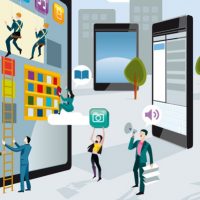 It has been one of the star spaces parallel to the II edition of the Television and Radio Festival held in Vitoria, and has been attended by more than 300 professionals from all over the country.

BRANDUCERS has managed to gather brands, media, producers, advertising agencies and media agencies for the first time on a single stage to discuss the evolution of advertising in the face of the economic situation and technological changes.

In addition, renowned names such as Avi Savar, Brent Friedman, Michael Sardo and Cindy Gallop, have raised the level of the sessions, providing the best international practices of branded content.

The forum was conducted by the publicist Risto Mejide, and has had the active participation of brands that are betting on branded content such as BBVA, Movistar and Danone.

This forum has made it possible to analyze the evolution of advertising in the media, whether in print, Internet, television, radio or abroad, transforming traditional advertisements into relevant content produced by the brands themselves.

After this successful first edition of BRANDUCERS, and in the mouth of the organizers, a second edition is already planned next year.

Framed in the Jesús Guridi Auditorium, before an enthusiastic audience of more than 300 people and with speakers who stepped on for the first time, the first edition of BRANDUCERS was held, the first national forum on contents produced by the brands themselves in order to complement and enrich the current contents and classic advertising formulas.

The purpose of the forum was, in the words of publicist Risto Mejide, promoter of the initiative, “that those who pay for the media party, which are the brands, have their voice in generating content for their users.”

With this controversial starting point, and with a busy schedule, the forum was attended by four high-profile international speakers: Brent Friedman and Avi Savar, from the prestigious companies Electric Farm Entertainment and Big Fuel Communications respectively, Michael Sardo, producer and screenwriter of the TV series Fairly Legal and Cindy Gallop, visionary and Brand Innovator.

“Advertising is words and content is action” (Brent Friedman) “We must think like editors and reach people with human stories, not with product stories” (Avi Savar)

“I do not want to do the work of advertising, my shows will do it on their own if done the right way” (Michael Sardo)

“The new consumer will admit brands in their conversations naturally, as long as they avoid selling something directly to them” (Carlos Carrión, Contents Area)

“The consumer will be willing to spend 5 minutes talking about your brand but not even 5 seconds to listen to your own version of it” (Peter Boland, Consultant)

“The user is the absolute king, he is the one who chooses, creates and distributes the content” (María Ferreras, Youtube)

“The ROI of our action is to see Hindus in La Tomatina” (Enrique R. de Lera) These presentations were complemented by two round tables never seen before: a first moderated by Risto Mejide and with the participation of three media (Javier Bardají, Director General of Antena 3, Patricia Marco, Director of Antena of Mediaset and Fernando Jerez, Director of Antenna of La Sexta) and three advertisers (Carlos Carrión as General Director of CONTENTS ÁREA, Michel Messina, Content Director of Telefónica Cable and Carlos Bosch as Media Director of Danone).

“Branded content is in the trial and error phase. Brands have to flee from telepromotion to more subtle formats “(Javier Bardají, Antena3)” Branded content allows us to exploit a new dimension in communication “(Carlos Bosch, Danone)

The second round table counted with the participation of four producers (Juanma Paz, General Director of SCOPE, Javier Méndez, Head of Multimedia and new businesses of Globomedia, Juan Pascual, Director of Advertising of Vértice360 and Tinet Rubira, Managing Director of Gestmusic) and of three specialists from media and advertising agencies (David Colomer as General Director of Arena Media, Francisco Vaquero as Content Director of AFTERSHARE.TV and Javier Regueira, founding partner of Popup Music and blogger).

“We have a serious problem of dialogue between brands and producers” (Tinet Rubira, Gestmusic)

“The consumer seeks entertainment no matter if it is in prime time or not and what he does not want to see is intrusion” (Javier Regueira, Popup Music) Also, as a great novelty, the forum introduced two more elements: A final workshop with Brent Friedman as facilitator and open to everyone, and several private upfronts in which the producers presented to the sponsors of the day branded content proposals designed and designed specifically for their brands.

Regarding this second point, Carlos Bosch, Media Director of Danone and assistant to one of the upfronts has described it as “an innovative and honest new tool to detect, based on the challenges of the brand, projects that can be distributed by the media”.

The main conclusions could be summarized, in the mouth of Risto Mejide and the organizers themselves in:

The only way to convey a brand message to a fragmented audience is through good stories that engage.

To develop branded content, all (brands, creators and programmers) have to overcome their distrust and be generous.

There is no magic formula for the business model or the “route to market” of branded content.

Previous post Branding: When the sale was made, what’s next?