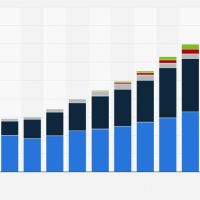 Total advertising spending in the first nine months of 2018 grew by 6.4% compared to the previous year and the period ended with an investment of 94.06 billion, according to the latest study released by Kantar Media. During the third quarter of 2018, advertising spending increased 8.7% compared to the previous year, which makes it the best quarter since the end of 2010.

Television followed the pace of advertising recovery. Investment in television ads increased 27.8% after the wave of political campaigns and sustained demand from car companies and retail advertisers.

Advertising on Spanish-language television increased 11.9%, driven by the World Cup during the summer months of June and July.

The growth of advertising on cable TV (9.0 percent) and Internet TV (+6.1 percent) corresponds to the sharp increase in advertisements for cars, financial services and consumer goods .

Internet advertising registers the second most important growth, with an increase of 7.7% compared to the same period of the previous year. Outdoor advertising follows closely with 7.3%.

In the radio sector, it continues to grow. Spending on advertising in national radios amounted to 15.9% and local radio reached 3.8%.

The consumption of magazines, after a weak quarter, recovered solidly in the following months, increasing by 2.8%. Sunday magazines grew by 8.1% and benefited from higher advertising spending by pharmaceutical companies and home reforms.

Spending on national newspapers increased by 6.8%, thanks mainly to the Wall Street Journal. Local newspapers continue to fall; in fact, spending has decreased for 20 consecutive quarters.

Finally, the main categories according to their volume of investment have been automotive, telecommunications, financial services.

Gas vs electric for your commercial kitchen appliances

Alternative Living That Is Cheaper Than a House